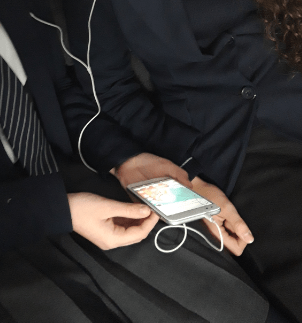 Phones are often used for cyberbullying and students need to be confident in assertively blocking any negative messages from so called ´friends´. In our PSHE session on Friday several students admitted to spending over twenty five hours per week on screen. This generation is the first to grow up with screens as a normal part of their life. They have never known a time in which they did not have access to a mobile phone! It is the case that phones can be used for learning, to look up facts and to make arrangements for pick up time with parents.

However, it is also true that for learning phones can only assist with superficial fact based learning and are no substitute for the real in depth progression which comes from reading a challenging book or even, for example, practically building an engine to understand how it works. It is also the case that use of phones can causes arguments between parents and young people as phones are sometimes taken away as a punishment. Often this leads to resentment as young persons concept of their own independence is often associated with having their phone.

In PSHE we discussed how with positive discipline it is better not to take a phone away, rather to emphasise activities which encourage communication as a family. Focus could instead be placed on encouraging young people in activities in which they communicate face to face with people of their own age and where the art of a good conversation is valued.

The PSHE is a useful time to support Year 10 and Year 11 to lively positively in the modern world and to prepare them for the future.